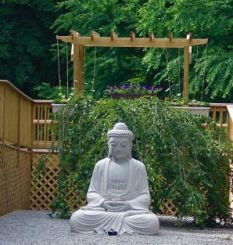 On Friday afternoons I drive for an hour down to Providence, Rhode Island to take tin whistle lessons, and learn more about Irish music, from a woman who is a student at Providence College. She has been playing Irish flute and tin whistle for many years, and plays both in her own band and in festivals and competitions around the area.

A couple of weeks ago we were talking about something related to breathing techniques and the tin whistle, and she paused and said:

“Has anyone ever taught you how to breathe?”

We both kind of paused and then laughed, since of course it sounded like a silly question. I wanted to respond: “I've been doing my own breathing for about forty years now, and I seem to be doing fine.” But I didn't. She went on to explain the difference between breathing from the diaphragm and breathing from the chest, which makes a difference in the pitch of the whistle.

But her question has been on my mind lately, especially after my second session last evening with the Boundless Way Zen Buddhism group (temple grounds pictured above left). Once again we met at Worcester's First Unitarian Church, where the Boundless Way group holds a beginner-friendly Zen practice session on Monday nights.

Since my session last week, when I first received the instruction to help the meditation process by focusing on my breathing, I have been trying to pay more attention to my breathing. The teacher last week told us not to worry so much about where our breath came from—chest or diaphragm—or whether it was deep or shallow or anything else.

“Just follow it,” he said, by which he meant just to pay attention to the air coming and going out. Focus your thoughts on the process of your breath.

This Monday evening, when I sat down, I felt the rewards of my practice during the week. It seemed natural for me to sit there in silence and, as this week's teacher put it, “make a commitment to following your breath.” As I have been learning to follow this practice, I have begun to realize what a powerful and brilliant technique it is to empty and calm your mind.

It's almost impossible to say to yourself, “Stop thinking about X!” and then to actually stop thinking about it. If you've ever felt anxiety or panic, you know this from experience: you want to try to stop your mind, and you keep telling yourself to stop, but your mind doesn't listen. Your very inability to stop your thoughts only makes you more anxious and panicky, creating a vicious cycle that's difficult to escape.

Focusing on your breathing, by contrast, gives your mind something else to do; instead of telling your mind to stop, you're telling it to turn its attention to something else. And of course you are ALWAYS breathing, so you can focus on your breathing for as little or long as you like. I have been finding more and more that in any situation in which I used to feel nervous, anxious, or any other negative emotion, I can just start paying attention to my breathing and almost immediately I find myself relaxing.

Over the past few months, after a health scare in May, I have been struggling to try and comfort some latent feelings of anxiety over the incident and its aftereffects. Whenever I was not concentrating on a specific task, my mind would wander into worry and anxiety over the future, my health, and more. Over the past couple of weeks, though, as I have been working to pay attention to my breathing, I have noticed that whenever my mind begins to wander away from a task, I turn it to my breathing. Almost immediately, I begin to feel those anxieties—and just about every other anxiety I have—melt away.

It seems too good and easy to be true to me at this point. But of course it hasn't been easy. I started meditating back during the summer, and then spent two months sitting in silence with the Quakers. And I have spent several weeks now working to try and pay attention to my breathing. I am just beginning to see the positive effects after all of that time.

From what I have seen and learned in my Buddhist session thus far, I find myself again in a spiritual tradition—much like the Quakers—which puts its emphasis more on spiritual discipline and practice than on adherence to formal creeds. Although both Zen sessions I have attended have included a brief talk, the talk this week essentially suggested that the talks were useless unless they were helping you do what you were already supposed to be doing: focusing on your breath.

I have been doing some reading in the Buddhist tradition, and trying to learn more about how this emphasis on the breath translates into broader spiritual practices, and on how we should live as ethical beings in the world. I will begin to describe what I have found thus far in next week's blog.

I would certainly welcome comments, though, from anyone who may know more than I do—and from anyone who has spent time, as I have in these past few weeks, learning how to breathe.
Posted by James M. Lang at 4:45 PM