Final Thoughts from the Dalai Lama 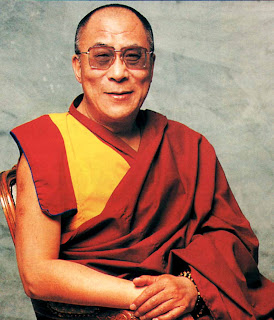 The new year marks a transition for me to a new spiritual tradition (more on that next week), but before I embark on the next phase of my project I wanted to offer a final commentary on my experience with Buddhism—-and I want to be clear that this is not a commentary on Buddhism itself, but on my experience with with Buddhism. I hope I can make this distinction clear.

I found much of value in Buddhism, as my previous posts should demonstrate. I think it offers a terrific array of practices and principles that can help people lead a happier and more spiritual life. I will continue practicing the meditation techniques I learned from the teachers at Boundless Way, and expect that I will continue reading works by some of the Buddhist authors that I studied during these past couple of months, including the Dalai Lama and Thich Nhat Hanh.

In the end, though, as someone who has lived within a Christian framework for forty years, I found too many elements of Buddhism that were too foreign to me to make sense in my worldview. Those foreign elements were in some cases tied into the principles and practices in ways that made me feel uncomfortable even when I was engaging in the beginner meditation sessions.

I can maybe best explain this by noting a few elements of the last book I read from the Buddhist tradition: How to Practice: The Way to a Meaningful Life, by the Dalai Lama.

Two of the documentary films I watched about Buddhism included interviews or scenes with the Dalai Lama, and he came across as one of the most wise, warm, and happy human beings I have ever seen (search Google Images for the Dalai Lama and you will find a thousand images of him, in just about every one of which he is smiling). He had a warm and rich sense of humor, and yet came across as such a divinely spiritual person that it was not difficult to imagine how he inspires millions of believers. He also has an incredible track record of working globally for peace and social justice in the world.

His book reflects all of these qualities, and it has a particular focus on learning how to develop compassion for others. He suggests some meditative techniques for cultivating compassion that have made a real difference in how I view and treat those around me.

As he points out, for example, “each and every other sentient being wants happiness and does not want suffering, just like you; in this fundamental way you and they are equal.” What follows from this realization, he argues, is that we should do everything we can to reduce suffering in other creatures, animal or human. I have been trying to walk through the days now with this simple reminder in my head.

However, the Lama also says some strange things—-strange, that is, from my Judaeo-Christian perspective.

Dying, orgasm, meditation . . . I get all that. But yawning and sneezing?

After I read this, I started to pay attention to my mind when I had to sneeze or yawn, and I never got the sense that I was experiencing anything other than a yawn or a sneeze.

More substantially, though, the Lama's spiritual practice depends upon the idea that you are seeking release from the cycle of birth-death-rebirth in which all sentient creatures are engaged. To offer a massive oversimplification, the idea is that as you become more compassionate and enlightened, you move up to higher and higher levels of bodily form until you achieve enlightenment and finally escape this cycle.

While I don't think this belief is any more outlandish than what any other religion believes, I also just can't seem to wrap my head or my heart around it. I am too stuck in a Judaeo-Christian mindset to accept this larger picture of the world.

So while I won't be converting to Buddhism at the end of the year, I do hope to continue practicing the meditation techniques it has taught me, and to remember, as the Lama says, that “even a small act of compassion grants meaning and purpose to our lives.”
Posted by James M. Lang at 10:11 AM