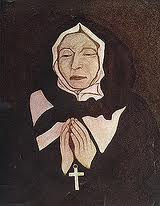 It has been quite a while since I posted an update, mostly because this time of year is insanely busy for me. I also have had a couple of weekends away, one of which was a quick trip to visit Montreal while my brother Tony was in town from Scotland. Tony and I have been working on an article together for Notre Dame Magazine on the relationship between religious faith and fantasy literature, and one of the highlights from the weekend was sitting in a brewpub for lunch in the old city while Tony outlined the remainder of the work we had to do on the back of a placemat.

After we had our lunch, we wandered off down the main thoroughfare in search of something to see, and Tony suggested we try a museum that was dedicated to the life of Sister Marguerite Bourgeoys. The museum description promised a tour of her chapel, a view of the old city from a tower, and an underground excavation site of a 17th-century chapel, so I said sure.

It turned out to be a fascinating place, in part because of the fascinating woman to whom it was dedicated. Sr. Bourgeoys was a French nun who came to Montreal from France in the middle of the 17th century. There she founded a small religious order—the first religious order to be founded in North America—and built a chapel and housing to help educate local young women. Unlike many schools and religious orders at that time, hers required no money or family connections to enter; her convent and school were open to all, rich and poor, French and native.

She served as the Superior of her community for many years, until her retirement in 1693; she died in 1700, at the age of eighty.

The museum fulfilled its promises, offering a nice view of the old city and a beautifully restored chapel. Beneath the grounds we were treated to a semi-private tour of an excavation site where the walls of the original 17th-century chapel stood next to two-thousand year-old artifacts from native Americans.

In the gift shop I bought a short history of Bourgeoys's life, and have been reading it over the past couple of weeks. She was canonized by Pope John Paul II in 1982, making her the first female Canadian saint.

I find her both inspiring and a little strange. Her complete dedication to the cause to which she committed herself, despite many hardships, is almost miraculous. She was so convinced that God would provide her that she gave away her inheritance, often traveled with no money or provisions, and lived with constant hope in the face of many setbacks, including the burning of her original chapel and house.

But she was also one of these religious people who mistrusted any earthly pleasures, and who practiced self-mortification in a frequent, informal way. On one of her trips back and forth from France, for example, she slept on a bed of coiled ropes for the journey of several weeks.

Still, she lived a pretty incredible life for a woman of her time, and her dedication to her fellow sisters and the students they took in was unquestionably powerful. For my fellow teacher friends, I will leave you with one of her descriptions of the vocation of the teacher:

“It is the work [most] suited to draw down the graces of God if it is done with purity of intention, without distinction between the poor and the rich, between relatives and friends and strangers, between the pretty and the ugly, the gentle and the grumblers, looking upon them all as drops of Our Lord's blood.”
Posted by James M. Lang at 7:25 AM No comments: Links to this post

But in making this or any other assessment about the denomination, any reviewer is confronted by the difficult of 'finding' Adventist theology.

From the outset of my time with Seventh-Day Adventists, I have been wondering when I would confront some of the doctrines which I find strange or silly. I have noted a few of those in previous posts, such as the belief in the six-thousand year-old earth that fundamentalists find in the literal interpretation of the Bible. Adventists also believe and hope fervently for the imminent return of Jesus Christ, whose coming will initiate a sequence of apocalyptic events that lead to the end of the world.

Last Wednesday, after a prayer meeting held in the sanctuary, I stuck around for a while and talked to one of the prayer service leaders. I have been hanging around the church enough now that I have made a few friends, and so our conversation ranged back and forth between personal and theological matters.

As I was getting ready to leave, I told him how impressed I have been with the warm and welcoming nature of the church, and with some of the specific practices I have witnessed during the prayer service.

“In the end,” I said, “if we were to sit down and talk about some of the specific things you guys believe in, I'm sure we would have some disagreements, but mostly I've really learned a lot here.”

“You're Catholic, right?” he said to me.

“Do you believe in everything that the Catholic church says?”

I laughed. I'm not a very doctrinal Catholic.

“Same thing here. People in here believe in all kinds of different things. What's important is that you believe. You gotta have faith.”

Afterward it occurred to me how much I judge believers in other religious based on their official doctrines. Adventists, Mormons, Orthodox Jews, Muslims—all of these religions espouse theological doctrines or political views that I find strange, silly, or off-putting for one reason or another. And so whenever I think about or meet someone who belongs to one of those religious traditions, I immediately put them into the box of that religion's official doctrines.

And yet, of course, I wouldn't want anyone to put me in the box of the Catholic Church's official doctrines. It seems silly that I would have to spend all this time and energy on my spiritual quest to learn the very simple lesson that other people are just like me—that I shouldn't assume the next Mormon or Muslim I meet follows the doctrinal party line on all religious matters, and that in fact we may have more in common, in terms of our beliefs, than I might have ever guessed.

Of course all of this raises a larger question: why do people, myself included, join or remain in religious traditions with which they might have fundamental disagreements?

Good question, but too large for this blog. I will save my thoughts on this for the book project—but, in the meantime, would welcome your thoughts and comments below.
Posted by James M. Lang at 11:45 AM 11 comments: Links to this post