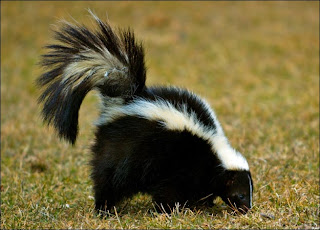 Last summer I sat down in my backyard one evening to reflect on my life. For reasons that I can't really remember right now, I was feeling unhappy about living in Worcester, and wondering whether I should go on the job market and find my family a new place to live. Before I began to reflect on the topic, I did something I haven't done in a long time. I asked God to send me a sign.

I wanted some sort of divine finger pointing me to the direction I should take: stay or go?

I closed my eyes and meditated for a while, until I heard a rustling noise right near the bench I was sitting on. I opened my eyes and saw that a skunk was about three feet away from me, snuffling his snout through the grass and looking for grubs. I had competing impulses to jump up and run away and to continue sitting quietly and hope for the best. Since he was already so close to me without having taking any notice, I figured it best to sit tight and let him proceed on his way.

Which he did, walking directly under the bench I was sitting on and meandering his way across the yard and eventually back behind the garage. I felt a small thrill to have experienced such closeness to a wild animal in my own backyard, even if it was a pretty common and urban wild animal.

But immediately after he left, it occurred to me that such an unusual experience had to be the sign I was waiting for from God. But what did it mean?

I decided quickly that it meant I should stay. God sent me that strange encounter to remind me that wonderful and unusual encounters were available to me right here where I lived; I didn't need to go searching for excitement in my life elsewhere, when I could find it right here in my own backyard. The thrill I felt in my encounter with the wild was open to me always, if only I was willing to open my eyes and experience it.

Several weeks later, though, still feeling some dissatisfaction with Worcester, I realized that I had obviously misinterpreted the sign. While it may have been a wild animal, it was a particular wild animal: a skunk. God, with an impressive sense of humor, had sent me a very obvious message: Worcester stinks—get out as soon as possible.

It has been almost a year now since I met that brave little skunk, and I have no idea anymore what its appearance might have meant. I still can't shake the feeling that it meant something, though—nothing like it has happened to me before or since, and the fact that I asked for a sign just before he came to visit me gives me this inescapable feeling that he was sent for me. I just can't seem to settle on a definitive interpretation of the meaning of that skunk.

Which brings me to Harold Camping, whose prediction that the Rapture would occur on May 21st proved so spectacularly wrong, and who has responded to his error by acknowledging that he was wrong—and posing a definitive new date for the Rapture, on October 21st.

While I don't much believe that anything like a Rapture will take place whenever our time here in this universe has run its course, I don't have any problem with people like Harold Camping believing in such things, as long as it doesn't interfere with charitable and loving practice towards your fellow human beings. And I don't really even have a problem with people speculating about when the end of the world will take place—although, as many commentators on Camping have pointed out, Christ specifically says that nobody, except for God in heaven, knows when the end of the world will take place.

What strikes me as the real problem with Harold Camping, and the legions of others down through history who have made such predictions, is their certainty. There I think they go terribly wrong.

Most of the great ills in the world, it seems to me, are caused by people who have absolutely no doubts in the truth of their convictions. When you are fully convinced that you are right, it gives you the latitude to dismiss the views of others, to justify bad behavior on your part, and to browbeat everyone around you with your convictions. It impels you to make predictions about the end of the world and pronounce them on your radio show, inspiring millions of people to fear and hope that they will be in heaven at the end of some specific day. It leaves a lot of sad and disillusioned people, still standing here on earth, at the end of that day.

None of this means that people shouldn't have strong convictions—they should. But my strongest conviction is that you should always allow for the possibility that you are wrong. Maybe if you have a really strong conviction, you're ninety-percent convinced. But holding out that ten percent might make all the difference in the world in how you behave towards people who don't agree with you.

My experience with my smelly little friend served as a great reminder of all this for me. Whatever I believe he might have meant, or not meant, I should always hold out the possibility that my interpretation might be wrong. And so, of course, should Harold Camping and all his followers.

Maybe that's what the skunk was sent to teach me, after all.