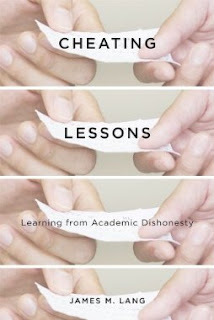 Publication will be in early August.  This was the second proposed cover; the first one was an image of a Pinocchio marionette against a white background.  I like the old-school note-passing in this cover, and of course the idea that it's "copied" four times.

1) Of my four books, this is the first and only one on which a person's face does not appear on the cover.
2) This is the third of my four books in which a variation of the word "learn" appears in the title.  This could be interpreted either as an admirable consistency in focus or as an unfortunate lack of imaginative powers.  I will leave that up to the reader.