Chinese Translation of On Course

Around this time last year I received a letter from Harvard University Press letting me know that my book On Course: A Week-by-Week Guide to Your First Semester of College Teaching was scheduled to be translated into Chinese.  This was such a wonderful and unexpected piece of news that I hung the letter up on the bulletin board above my desk so I could see it on a regular basis and remind myself of my good fortune.  The translation was promised to arrive in November of 2014.

Starting in around December 2014, I began doing searches for my book at the publisher that had been named in the letter, but their website had only a few small things in English, and so I never found it.  The spring rolled on by, and still I never heard anything about the translation or received any author copies.  I assumed that perhaps something had gone amiss.  This was actually supposed to be my second translated book, although I'm still not sure if the first book was published.  One year I received a royalty check for my share of the Greek translation rights of Life on the Tenure Track: Lessons from the First Year.  But, as in this case, no author copies every materialized, and so I'm still not sure if it was ever published in Greece (any Greek speakers out there, let me know!). 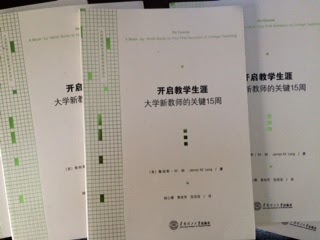 However, we returned from a family vacation earlier this month to find a box from Harvard University Press at the house, containing none other than the Chinese translation of On Course.  Even though I can't read a word of it, I still find it pretty thrilling to hold my first translated book--and even better that it has been translated into a language which LOTS of people speak.  If only every aspiring professor in China bought a copy . . . well, I'd be retired on a Greek island somewhere (and perhaps I would spot some fellow beach-goer reading the Greek translation of Life on the Tenure Track).

All of which is to say--send your aspiring-professor Mandarin-speaking friends to the website of South China Technological University Press, and tell them to pick up a copy.  It turns out that my book was translated and published as one of eight books on teaching and learning in higher education that the press acquired, including Therese Huston's Teaching What You Don't Know and Barbara Gross Davis's Tools for Teaching.  All of the authors also received e-mails from someone at the publisher inquiring about whether we would have an interest in coming to China at some point to give some lectures on teaching.  Nothing has been scheduled yet, but that will be a most welcome event if it materializes.

The interesting twist in this whole saga has been that my last book, Cheating Lessons, includes a chapter on the history of cheating that analyzes the Chinese civil service exams, on which there was rampant cheating.  So when the letter about the translation first arrived, I assumed initially that they were writing about a Chinese translation of Cheating Lessons.  It wasn't until I read the letter a second time that I realized it was about On Course.  But I am still holding out some hope that a Cheating Lessons translation may happen at some point as well.

For now, though, I'm still just celebrating.  I have the translated books on my desk, where I can see them every day.  Sometimes I pick one up and flip through it, admiring the neat rows of characters, and wondering what they say . . .


Posted by James M. Lang at 9:00 PM No comments: Links to this post