This week marked the conclusion of the spring 2017 version of British Literature Survey II, a course I teach every spring here at Assumption College. 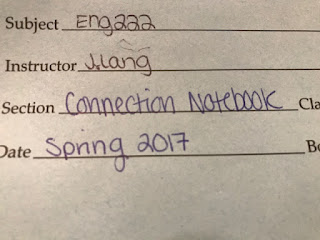 A few years ago I became interested in some research on human learning which suggested that students learned material more deeply when they could forge connections between the course material and things they had learned or experienced in other contexts. After reflecting on that research, and how I could use it to help my students learn, two years ago I began using connection notebooks in the survey course, which covers material that can often seem remote from the lives of 21st century American students.

As I explained in an article for the Chronicle of Higher Education and in my book Small Teaching, these are blue books that the students bring to class every day.  At the end of class, once a week, I ask them to pull out their connection notebook and write a one-paragraph response to a question designed to help them connect what we discussed that day with something outside of the class.  Questions might include:


Sometimes I leave a little time for us to discuss their answers, but at other times I simply use this as a closing class activity.  I collect the notebooks three times per semester, and the students receive a very low-stakes grade just for completing them--no right or wrong answers in the connection notebooks.  I absolutely love reading them, though; seeing the fascinating connections that students make gives me fresh enthusiasm for the works we are reading. I always vow not to allot much grading time to them, but find myself writing appreciative comments to almost every student in spite of my intentions.

This semester I ended with the following question: Of all the works we have read this semester, which one was the most interesting or meaningful to you?  Here's what the responses looked like, in order of popularity: 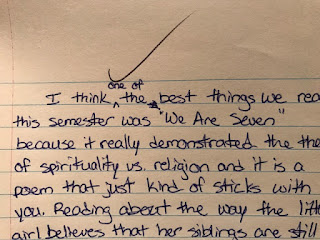 "We Are Seven," by William Wordsworth (6 votes)

The students love this poem.  I do a dramatic reading of it early in the semester, trying to convey the frustration of the speaker with the persistent little girl in his final lines.  For their final semester project, a group of students videotaped a staged reading of the poem in a nearby cemetery, complete with a blooper reel.

Especially in the wake of the 2016 election, the students found this novel's morality lesson on the evolutionary consequences of income inequality a fascinating story.

This one appeals to the symbol hunters in the class. Since the goblin fruit in the poem has multiple possible symbolic meanings, we spend a whole class period considering a variety of possibilities, and the students work in groups to come up with lines that would support the different readings. Always a fun, interactive class.

"Professions for Women" and "A Room of One's Own," by Virginia Woolf (3 combined votes)

In spite of the difficulty of Woolf's prose, a number of students really connected with Woolf's arguments about killing the "Angel in the House," and with her story about what would have happened to Shakespeare's sister if she had possessed the same level of talent as the immortal Bard (hint: it would not have been a happy ending).

"No Thank You, John," by Christina Rossetti (2 votes)

Two students really connected with Rossetti's brief poem in which the speaker tells the man who is pursuing her that he should get a grip--they'll never be anything more than friends.

Happy to see a couple of students sharing my love for Orwell. One student commented that it was interesting to see how a British colonizer felt so conflicted about his work, when she had assumed that the British colonizers were just evil racists.

Shocked to see this on the list; the student explained that she had read it in another class and not seen much there, but within the context of the Irish history we had covered she saw it in a whole new way.

"The Garden of Love," by William Blake

Students are surprised to see the conflict between spirituality and organized religion emerging two hundred years ago in a poem by William Blake; they assumed this was an entirely modern phenomenon.  Perhaps students at a Catholic college also empathize with a speaker complaining about "priests in black gowns" who are binding his natural "joys and desires."

Another one in which we discuss the gradual decline of religious faith in modern Britain.

"The Waiter's Wife," by Zadie Smith

The short story which eventually became White Teeth, which this student was reading in another class.

"To a Louse," by Robert Burns

So happy that a Burns poem made it on the list.  The student commented that this one had a timeless message: no matter how great you think you are, everyone still can suffer from life's little indignities.

I will definitely continue to repeat this question at the end of future survey courses, to see if the responses change over time. Whether or not this question produces any additional learning for the students, which I hope it does (in that they will have written in depth about one final work as they are preparing for the final exam), it will prove very helpful to me in recognizing how I can help each new group of students find meaningful connections to the works we are reading.