An Open Letter to President Trump, from an English Professor, on Random Capitalizations in His Tweets

I would like to begin by commending you for demonstrating to students of all ages that writing remains an important skill for successful people to master.  Previously students might have suspected that if they aspired to careers as business leaders, reality television stars, or politicians—and you’ve been all three, look at you!—they could leave behind all of the lessons they learned in their high school English classes.

The influence you have wielded over American culture by Tweeting your random musings to the public demonstrates the value of continuing to hone your writing skills throughout your life.  As I say to my students, writing can change the world.  Your Tweets have certainly helped demonstrate my point.

I have noticed, however—and please forgive an English professor’s perhaps annoying attention to detail—that your Tweets contain an excessive amount of random capitalizations.  Put more plainly, you capitalize words that just have no business being capitalized.

Consider two of your more recent Tweets—chosen at random, but very representative of your capitalization habits: 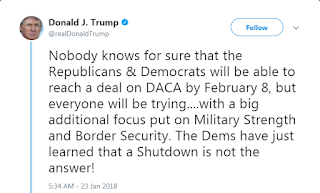 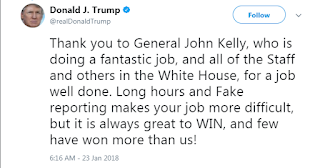 We don’t generally capitalize random words in sentences, as you have done in these Tweets.  Inappropriately capitalized words include:

The good news is that you got some right.  The following words were capitalized correctly:

But capitalization rules are a great equalizer in life (one might almost suspect they were developed by communists).  Much to your annoyance, they would also dictate the capitalization of names like Robert Mueller, individuals who immigrated illegally to the United States, and even the names of shithole countries. Low as these entities may be in your esteem, even they receive the benefit of capital letters at the start of their names.

Your random capitalizations are not an uncommon problem, you’ll be happy to know.  Inexperienced writers frequently capitalize words when they want to emphasize them.  Writing teachers like me try to explain that it’s better to revise the sentence in a way that emphasizes the key word through its location in the sentence, or perhaps through punctuation, than it is to break capitalization rules.

But, you might be objecting to yourself, some great writers used Random Capitals just like me. (See what I did there?)  True. You might be thinking of Emily Dickinson, a favorite American poet, who capitalized many words in her poems.  We generally give poets and other creative writers a little bit more license to break the rules than we do in nonfiction writing like your Tweets.  We do so especially in the case of brilliant and talented writers like Emily Dickinson.

Even though I hear you are a stable genius, we typically don’t extend that license to official nonfiction communications like a politician’s Twitter account. And after all, remember that you are modeling the writing of English for people around the world.  We need you to Make Capitalization Great Again!

I hope this little lesson wasn't too painful for you.  Next time we'll consider the use of exclamation points in our writing, which should be spare.  But for now, keep on Tweeting!
Posted by James M. Lang at 9:23 PM